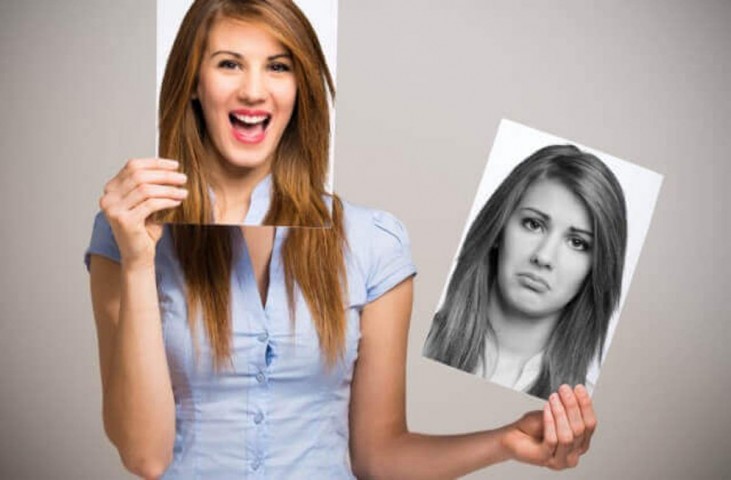 Bipolar disorder, previously known as manic depression, is a psychiatric illness which affects up to 1 in 50 Australians. Bipolar disorder is a mental health condition marked by extreme swings in mood and energy. It can affect the ability to function normally. The mood changes of bipolar disorder are more severe than normal ups and downs. They can hurt relationships and cause poor job or school performance.

The two mood extremes of bipolar disorder are mania and depression. Mania is an increase in energy and a decreased need for sleep. The mood may be overly happy or irritable. In depression , a down mood with heavy fatigue takes over. Irritability is common with depression too.

There are 4 forms of bipolar disorder: 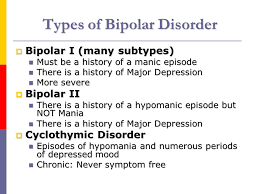 The exact cause of bipolar disorder is not known, although it would seem that genetics does play a large role. One theory proposed by psychiatrists and psychologists is that the illness might be caused by a chemical imbalance in the brain. It is thought that, in patients with bipolar disorder, the chemicals in the brain which help regulate mood (known as norepinephrine and serotonin) are easily skewed. Most people affected by bipolar disorder are in their 20s when they are first diagnosed. 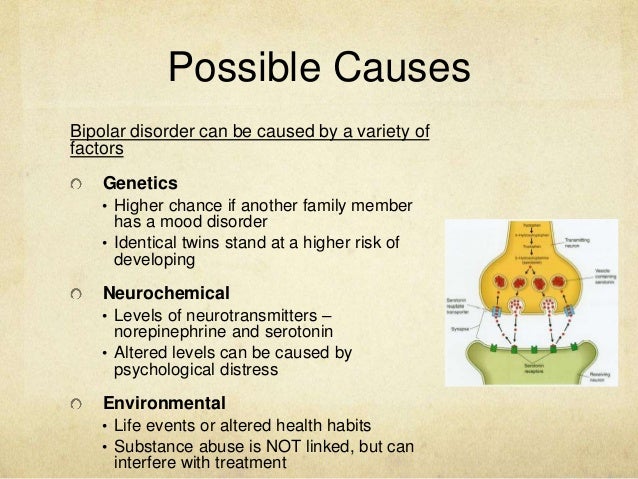 Signs and Symptoms of Bipolar Disorder :

Bipolar disorder, also known as manic depressive disorder or manic depression, is a psychiatric disorder that causes extreme shifts in mood, energy, activity levels, and the ability to carry out everyday tasks. A person suffering with bipolar disorder experiences two extremes with distinct signs and symptoms:

Symptoms of bipolar disorder can be severe and disabling, and frequently contribute to worsening symptoms of addiction or eating disorders in patients with co-occurring disorders. Bipolar episodes are different from the normal swings in feelings or moods that everyone goes through from time to time.

Both mood and behavioral changes can be signs indicating someone with bipolar disorder is experiencing a manic phase or episode:

When a person suffering with bipolar disorder enters a depressive phase, the signs and symptoms create a stark contrast with the preceding manic episode:

During particularly severe episodes of either mania or depression, a person suffering with bipolar disorder may experience psychosis. Psychosis is the term for a state of detachment from reality, which may be either temporary or prolonged. Bipolar psychosis is characterized by two types of symptoms:

Ayurvedic descriptions of mental illness are mainly incorporated under the heading of "Unmada". The term Unmada comprises all psychiatric disorders and can be translated as psychosis. In Ayurvedic texts, there is a detailed explanation of “Unmada”. Unmada is a kind of insanity that affects the mind, intellect, consciousness, knowledge, memory, inclination, manners, activities and behaviour. There are five known classifications of Unmada and some symptoms of Bipolar disorder are similar to these and a few others are parallel to the description of the classification. Unmada five types are- Vataja, Pittaja, Kaphaja, Sannipataja and Agantuja or Bhootonmada. Vataja unmada is characterized by various inappropriate behaviors like, smiling, laughing, dancing without reason, excessive talking and wandering. In Pittaja unmada, restlessness, anger, sleeplessness and hostility are the predominant features where as in Kaphaja unmada, loss of appetite, psychomotor retardation, solitude and excessive sleepiness are the predominant features.

The three gunas (Tamas, Rajas, Satva) of the mind play a very crucial role in altering the mood of the individual. A person with Tamas (meaning ‘darkness’) is felt as dullness or darkness of mood and as physical indolence, heaviness or lethargy. Rajas bhava is felt as agitation, desire, instinct, determined and passion, and expressed as physical tension, distress, excitement and activity in all its forms. Where as Satva is felt as pureness, radiance, calm lucidity, balances and buoyant lightness of being. Every individual’s mood is constantly an embodiment of a diverse combination of the three Gunas. 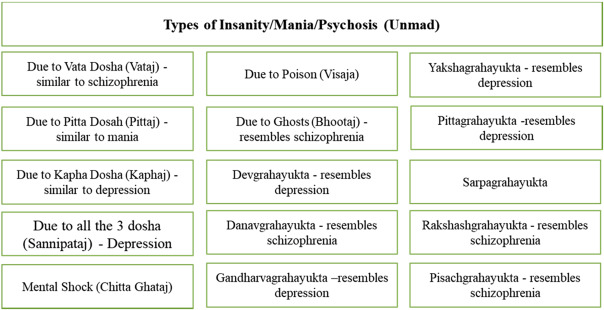 Causes of Biploar according to Ayurveda :

According to Ayurveda, Bipolar disorder is caused due to imbalance of vata, pitta and kapha dosha and the mental properties satva, rajas and tamas. Ayurveda associates it mainly with the aggavated and imbalanced Vata Dosha – the energy that controls the brain and the nervous system.

Ayurvedic experts also consider bipolar disorder as a lack of stability or Ojas (which signifies strength, immunity and vitality). Ojas can be considered as the essence of all the seven Dhatus that are present in the body. A decrease in the level of Ojas may lead to difficulty in nourishing emotional responses.

Changes in the underlying emotions are brought on by vata-provoking qualities in the individual’s lifestyle, habits, foods and activities as written below :

* Using intoxicants such as alcohol or recreational drugs
* Following irregular routines with no stability
* Traveling frequenty
* Eating while anxious, sad and angry
* Eating while performing other activities
* Taking in stimulants such as coffee or cigarettes
* Over dependency on TV, mass media, social media
* Suppressing inner creativity and emotional sensitivity
* Going to bed late
* Excessive loud music or noise
* Engaging in excessive physical or sexual activity
* Failing to change lifestyle and diet according to season changing 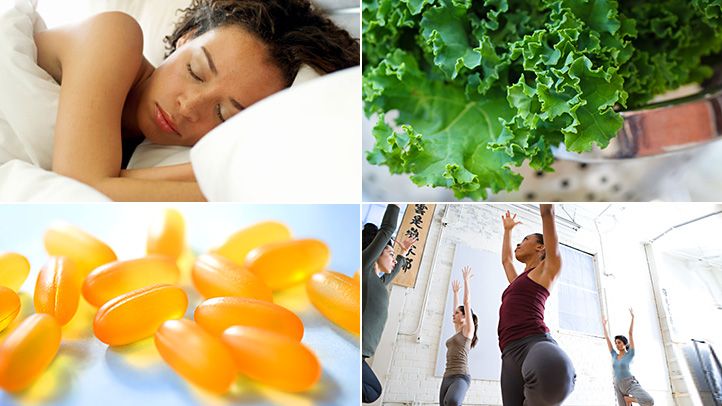 Ayurvedic treatment helps in balancing the imbalanced or aggravated dosha, increases the ojas and also enhances the satva guna of the individual. Ayurvedic treatment of bipolar disorder is focused on strengthening the overall physical and mental health. The Ayurvedic treatment is complex, complicated and, at the same time, strictly individual according to the specific imbalances in the general health condition of the patient.

Ayurveda has described three types of management for treating psychiatric disorders or unmada as following : 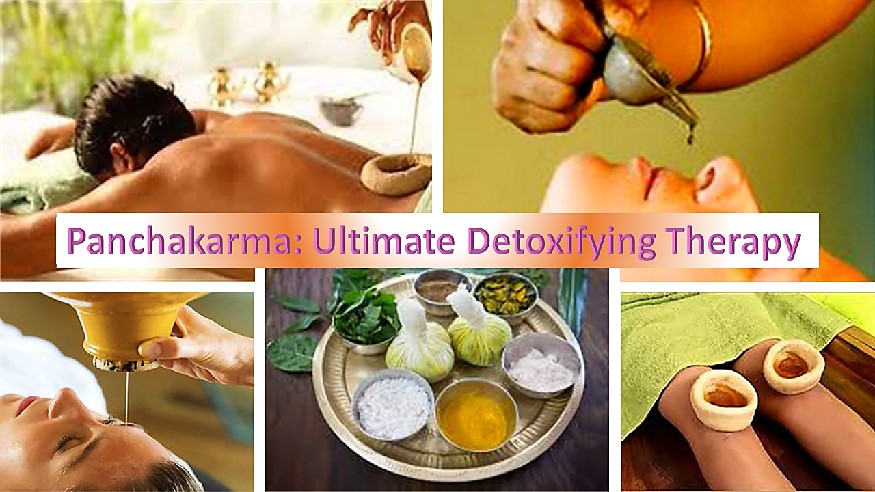 Along with above mentioned Herbs and Ayurvedic Panchakarma therapies, Yoga, Pranayama and meditation play a very important role in enhancing the Satva guna. . A bipolar person in the state of Tamas will be benefited with yoga, pranayama and meditation. The mental status is enhanced from Tamasic to Rajasic and then to Satva guna. It sooths the mind and balances the internal and external energy of the body. It helps the individual to expand his thoughts and think better. Deep breathing and yoga asana practice have a tremendous effect of the mind and body. Regular practice of this helps a bipolar suffer to balance his emotions and moods.

* Fresh and light foods such as vegetables, milk, fruits, most grains, split or whole mung dhal and almonds increase calmness, clarity and creativity of the mind — in other words, they enhance Sattva.

* During cooking using ghee as medium. Because ghee is clarified butter, free of milk solids, proteins and water, it has amazing nutritive and medicinal qualities, besides being extremely flavorful and aromatic. Its penetrative qualities make it an excellent medium for aiding the absorption of nutrients by the body, while also lubricating the tissues.

* Stricktly avoid any refrigerated, processed, artificially colored, canned and chemically preserved foods as far as you can. They increase ama, or toxic undigested matter in the physiology; tax the body’s agni, or digestive fire; lack vitality; and do not stimulate your Sattva.

Ayurvedic bipolar treatment is becoming more and more popular as people want to avoid the side effects of medication drug and want to turn to more natural approaches. Ayurveda can help you stabilize the mood swings of a person with bipolar disorder. This can also help immensely in promoting better concentration. This can also help greatly in calming the nerves and has mild sedative effects. If you or your loved one is suffering from these types of health issues, you can book appointment with our expert Ayurvedic doctors to discuss customised treatment plan. 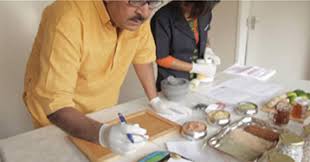