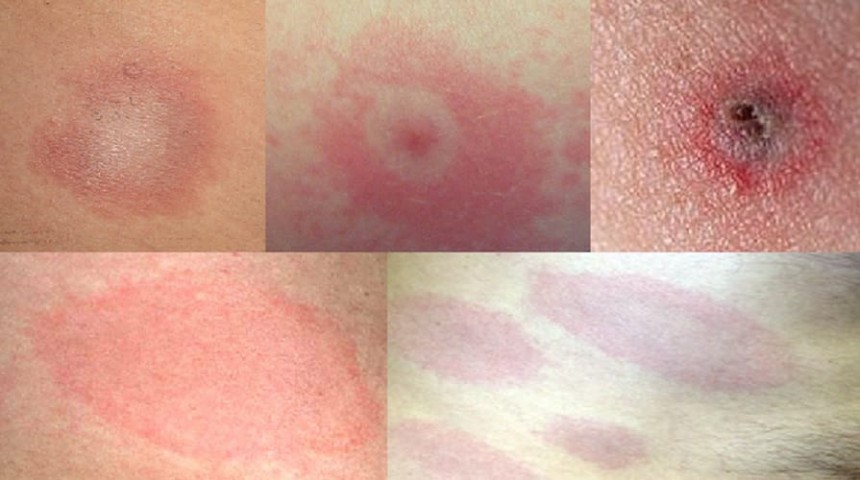 The name 'Lyme disease' was coined in the United States of America when an outbreak of juvenile arthritis occurred in the town of Lyme in1975, Connecticut, and the outbreak was subsequently found to be caused by the Borrelia bacteria.
Lyme disease is an infectious disease caused by the bacteria Borrelia burgdorferi sensu lato. B. burgdorferi is transmitted to humans by a bite from an infected black-legged or deer tick. The tick becomes infected after feeding on infected deer or mice.
A tick has to be present on the skin for 24 to 48 hours to transmit the infection. Most people with Lyme disease have no memory of a tick bite. People with domesticated animals that are let out in wooded areas have a higher risk of contracting Lyme disease. Although it is possible that Lyme disease may be transmitted from a pregnant woman with the infection to the developing foetus, this has not been documented conclusively. Lyme disease is not spread from person to person.

Lyme disease occurs in three stages: early localized, early disseminated, and late disseminated. The symptoms you experience will depend on which stage the disease is in.

Symptoms of Lyme disease start one to two weeks after the tick bite. One of the earliest signs is a “bull’s-eye” rash, which is a sign that bacteria are multiplying in the bloodstream. The rash occurs at the site of the tick bite as a central red spot surrounded by a clear spot with an area of redness at the edge. This rash does not represent an allergic reaction to the bite, but rather an actual skin infection with the Lyme bacteria, and is the only manifestation of Lyme disease that is sufficiently distinctive to allow clinical diagnosis in the absence of laboratory confirmation. The erythema migrans rash is classically 5 to 6.8 cm in diameter, with a bullseye pattern of one or more concentric rings of irritation and is sometimes confused with the rash indicating the presence of ringworm (Dermatophytosis). It may be warm to the touch, but it isn’t painful and doesn’t itch. This rash will disappear after four weeks.
The formal name for this rash is erythema migrans. Erythema migrans is said to be characteristic of Lyme disease. However, many people don’t have this symptom. Some people have a rash that is solid red, while people with dark complexions may have a rash that resembles a bruise.

Early disseminated Lyme disease occurs several weeks after the tick bite. During this stage bacteria are beginning to spread throughout the body. It’s characterized by flu-like symptoms, such as:

During early disseminated Lyme disease you’ll have a general feeling of being unwell. A rash may appear in areas other than the tick bite, and neurological signs such as numbness, tingling, and Bell’s palsy can also occur. This stage of Lyme disease can be complicated by meningitisand cardiac conduction disturbances. The symptoms of stages 1 and 2 can overlap.

Late disseminated Lyme disease occurs when the infection hasn’t been treated in stages 1 and 2. Stage 3 can occur weeks, months, or years after the tick bite. This stage is characterized by:

Lyme disease is diagnosed based on symptoms, physical findings (such as a characteristic rash called erythema migrans), and the possibility of exposure to infected ticks. Laboratory testing is helpful in the later stages of disease.
Lyme disease is most commonly diagnosed by a screening test called ELISA and this is then confirmed using a western blot test. Both of these tests detect antibodies that are produced by the immune system of someone with Lyme disease.
Lyme disease can also be diagnosed by testing a sample of the skin lesion by nucleic acid testing (eg PCR) or culture.

A course of antibiotic medication will usually clear the infection. The type of antibiotic, and the length of the course, can vary depending on individual circumstances. Your doctor will advise. Most people are diagnosed in stage one when treatment will clear the symptoms and prevent the development into stages two or three.
Treatment for persistent (chronic) Lyme disease or post-Lyme syndrome is controversial. Many experts do not believe Lyme disease is the cause of these long-standing symptoms. There is no convincing evidence that longer or frequent courses of antibiotics improve the symptoms. Unnecessary antibiotics may cause side-effects, or bacteria may become resistant to them, meaning infections are more difficult to treat in the future.

Ayurveda categorizes all microorganisms – whether microbes, viruses, rickettsiae or parasites - as Krimi (from the Sanskrit, meaning worm). All krimi divided into two main categories, viz., external and internal.
External krimi refers to microorganisms either emerging out of the human body (enteric parasites) or living on its surface (vermin or infectious microorganisms living on the skin). Internal krimi includes micro-organisms that reside within the human body and are categorized by habitat, yielding 3 types: those generated in or residing in the mucus – Kaphaja; those generated or residing in the blood – Raktaja; and those generated in the stool or rsiding in the lower digestive tract - Purishaja.
The Ayurvedic treatment of Lyme disease is aimed at alleviating or eliminating the symptoms, preventing complications and boosting the immune status of the body.
According to Dr. William Courson, an Ayurvedic Practitioner, Immunoaugmentative and antimicrobial medications which may also allay skin inflammation and should thus be utilized in the early stages of the disease include the following multiherbal formulations:

An initial formula comprised of Ashwagandha, an adaptogren, Manjishtha, a lymphatic detoxification agent and Nimba (Neem) as a microbicidal agent used complementarily with conventional antibiotic therapy.
The following multiherbal formulations are useful in preventing and treating the cardiac arrythmias sometimes associated with the disease:

Nervous system involvement can be treated with:

Involvement of the joints can be treated with the following single herbs:

as well as the following multiherbal formulations :

Symptoms resulting from this disease sometimes persist even after eradication of the Lyme bacterium, this is usually because of an ongoing auto-immune response in the body and is treated using herbal medicines including:

Lyme protocols often include items that can create constipation, giving rise to subsequent doshic vitiation and the accumulation of aam. To avoid constipation, gentler laxatives can be indicated to enhance elimination, and the multiherbal formulation Triphala is ideal for this purpose. Additionally, urinary and bladder symptoms are amenable to treatment with Shilajit.
For expert advise and personalised treatment protocol, please contact Dr. Sandeep Kumar and Dr. Anupam Vasudeva at Life Line Ayurvedic Herbal Clinic, Adelaide.