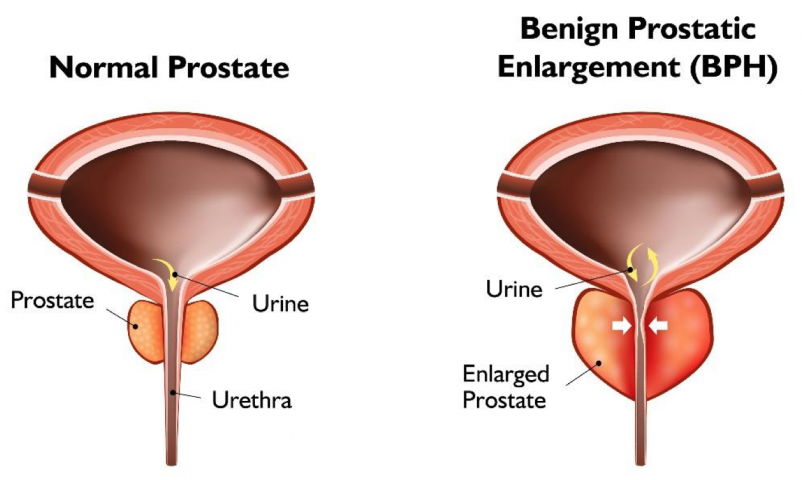 Benign prostatic hyperplasia (BPH), is a common urological condition caused by the non-cancerous enlargement of the prostate gland in aging men. The prostate is part of the male reproductive system, is about the same size and shape as a walnut and weighs about an ounce. It is located below the bladder and in front of the rectum, and surrounds the urethra, the tube-like structure that carries urine from the bladder out through the penis. The main function of the prostate is to produce ejaculatory fluid.

Since the prostate surrounds the urethra just below the bladder, its enlargement can result in symptoms that irritate or obstruct the bladder. A common symptom is the need to frequently empty the bladder, sometimes as often as every one to two hours, especially at night. Other symptoms include the sensation that the bladder is not empty, even after a man is done urinating, or that a man cannot postpone urination once the urge to urinate arises. BPH can cause a weak urinary stream, dribbling of urine, or the need to stop and start urinating several times when the bladder is emptied. BPH can cause trouble in starting to urinate, often requiring a man to push or strain in order to urinate. In extreme cases, a man might not be able to urinate at all, which is an emergency that requires prompt attention.

Several reviews exist on the current treatment approaches to BPH . What follows is a general overview and not a comprehensive review.

2. Drugs - Two types of drugs are primarily used, 5- a-reductase inhibitors and alpha andrenoceptor blockers (alphablockers). Finasteride (Proscar) is the most used 5- a-reductase inhibitor. It blocks the conversion of testosterone to DHT. Finasteride often requires 6 months to a full year before significant results are evident. Alpha-blockers such as terazosin, prazosin and others act by relaxing the muscles around the prostate, relieving many of the symptoms of BPH. While having a more immediate effect on symptoms, it does not change the underlying problems associated with the enlarged prostate.

In Ayurevda, prostate enlargement is named as parush granthi shoth. Ayurveda describes two conditions known as mootrakruchra and mootraaghaata, which coincide with the symptoms of prostatism or Parush granthi shoth. Mootrakruchra or strangury is characterized by severe pain in passing urine whereas in mootraaghaata, there is total suppression or intermittent flow of urine during urination.

Causes and types according to Ayurveda :

This problem is associated with urine elimination which is the function of apan vayu.  Apan vayu’s role is to control the movements of lower region of your back, pelvic region, urine excretion and ejaculation.Prosate enlargement is due to imbalance of vata doshas due to the consumption of foods which result in aggravation of vata dosha.There is One more  similar disease named as mootrakruchha which has  various types in ayurveda.