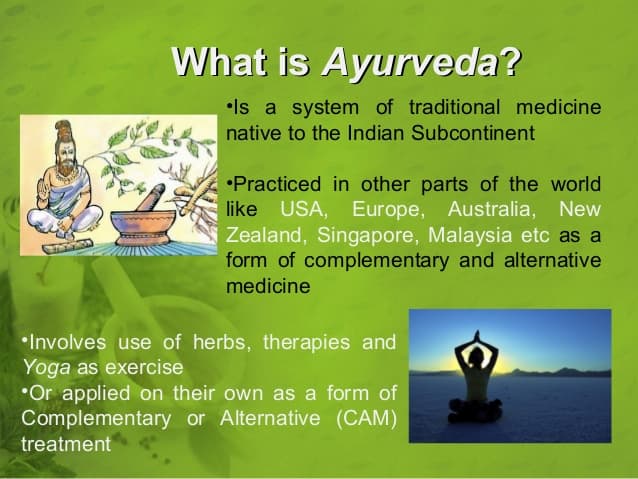 Ayurveda is the first known complete medical science of life known to mankind. It is composed of two words Ayu means Life, Veda means Knowledge.  This is, knowledge of life. Ayurveda is as old as Vedas, about 5000 years. Though,  this science is considered to have originated in India, today Ayurveda is widely accepted around many parts of the world. The Father of modern Plastic Surgery is Sushruta of Ayurveda. According to Ayurveda, health can not be a negative approach of keeping the body free from diseases but a positive one enjoying an uninterrupted sense of physical, mental and spiritual happiness ; it is therefore a 'way of living'. Charaka, Sushruta, Vagbhata, Madhava and Sharangadhara were the great Rishis or Fathers of Ayurvedic medicines. They were Yogis. They had great power of observation, generalisation and analysis. Their students made wonderful researches. India's fertility for medicinal herbs and plants contributed a great deal to the prosecution of their study of medicine.
Ayurveda serves as the best guide for the healthy and for the sick.

The Ayurveda itself is a perfect science treating in Surgery, Medicine,Therapeutics etc. Those antiquated sagas and Rishis had been men of miraculous powers.

Ayurveda can cure certain diseases for which the Allopathic Pharmacopoeia has no remedy. Many of the empirical methods of treatment adopted by many Ayurvedic physicians are of the greatest value.