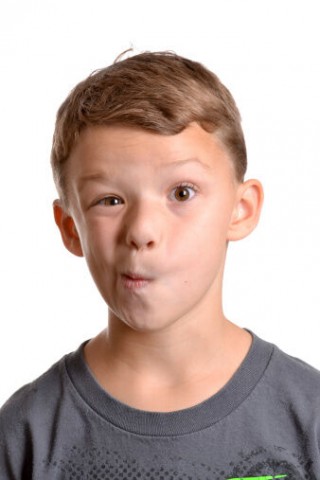 Tourette's Syndrome (TS) is a neurological disorder characterized by multiple repeated tics. Tics are abrupt, purposeless, and involuntary movements or vocal sounds. Some are mild and barely noticeable while others can be severe and disruptive.

TS is one type of tic disorder. Others include Chronic Tic Disorder (Motor or Vocal Type) and Provisional Tic Disorder. The three Tic Disorders are distinguished by the types of tics present (motor, vocal/ phonic, or both) and by the length of time that the tics have been present.


Classification of Tics and Tourette Syndrome :

According to the diagnostic and statistical manual of mental illnesses, tic disorders can be classified into:

Tics — sudden, brief, intermittent movements or sounds are the hallmark sign of Tourette syndrome. They can range from mild to severe. Severe symptoms might significantly interfere with communication, daily functioning and quality of life.

Tics are classified as:

Tics can also involve movement (motor tics) or sounds (vocal tics). Motor tics usually begin before vocal tics do. But the spectrum of tics that people experience is diverse.

Examples of physical tics are :

Examples of vocal tics are :


Tics aren't usually harmful to a person's overall health, but physical tics, such as jerking of the head, can be painful. Tics can be worse on some days than others. They may be worse during periods of stress, anxiety, tiredness.


Diagnosis of Tics and Tourette Syndrome :

The diagnosis of tics is usually clinical with the identification of specific tic phenomenology and their classification. However, some tests are carried out to rule out differential diagnosis and for research purposes to characterize the disease further.

To characterize a finding as a tic it must meet the DSM V criteria that provides for:

* The Absence of other etiologies such as drug and substance abuse

Ayurveda works on the principle of achieving balance among three main doshas- vata, pitta and kapha. According to Ayurveda, vata governs the air and body movement, and Tics and Tourette are caused by an imbalance of vata dosha.  Due to improper digestion, accumulation of ama dosha takes place which leads to harmful toxins accumulation. Along with vata doshas, this ama doshas causes blockage of channels of nerves and cause a neurological disorder. A further condition is aggravated with stress, anxiety, less sleep, vata aggravating behaviour and cause symptoms of tics.

Ayurveda also explains nearly same pathophysiology in case of Parkinson's Disease (PD) known as kampvata in Ayurveda, in which vata dosha aggravates in brain's nerves that leads to drying of nerves causing shaking of hands and stiffness in muscles.

To coorelate this in modern science, functioning of Basal ganglia should be understood. The part of the brain related to many movement conditions is called the basal ganglia. The traditional movement condition associated with malfunction of the basal ganglia is Parkinson's disease. Although Tourette's syndrome and Parkinson's Disease are both connected with problems in basal ganglia, the basic problem in the basal ganglia are rather different in these two conditions. In Parkinson's Disease, certain cells and sections of the basal ganglia degenerate and die off; unlike Parkinson's illness, the basal ganglia in kids with Tourette's Syndrome do not degenerate, but rather heads out of balance. This difference, degeneration as happens in Parkinson's illness versus imblalance which is more common in Tourette's syndrome, may explain why, in general, clients with Parkinson's disease usually get worse with age and why most Tourette's symptoms get a lot better and minimise with time. Ayurveda also says that Vata aggravates in old age and is minimum in childhood stage. So, in children due to increased kapha and less vata aggravation, nerves' drying effect of vata is minimum; resulting only in nerves' function imbalance. This basic concept of Tics and Tourette's Syndrome is already mentioned in old ancient Ayurveda texts dated back more than 3000 years. Ayurveda texts have mentioned about it's treatment protocol since then, that is proving helpful till today's time as well.

The Ayurvedic treatment of Tourette's Syndrome is targeted at managing the Tics and preventing neurobehavioral issues. Ayurveda offers very effective Herbal formulations along with other natural therapies. Some of the commonly used herbal compounds are :

Along with above mentioned herbal formulations, wonderful Ayurvedic therapies like Shirodhara, Nasyam, Abhyanga and Marma massage are helpful in reducing tics.Treatment needs to be tailor made for each individual person and needs to balance the tridoshas, especially Vata dosha. If you need to get Ayurvedic Treatment for this condition, you can book an appointment with our Ayurvedic experts at Life Line Ayurvedic Herbal Clinic here.