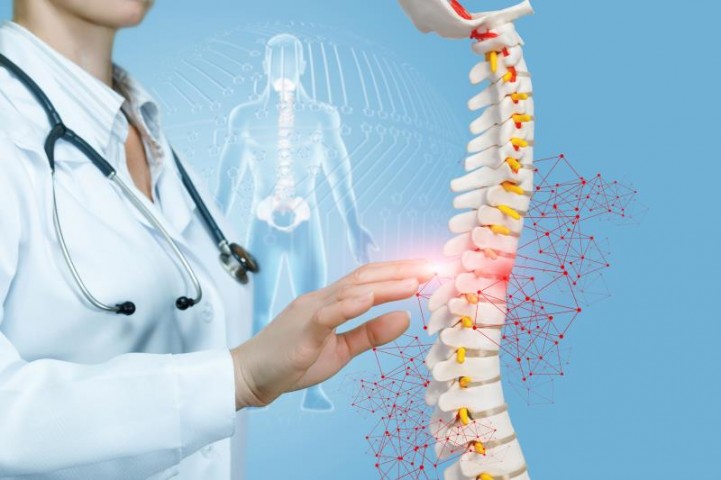 Osteoporosis is a disease in which bones deteriorate or become brittle and fragile due to low bone mass and bone tissue loss.
The condition is often referred to as a “silent disease” because you cannot feel your bones getting weaker, and many people don't even know they have the condition until after they break a bone.
Osteoporosis increases the risk of fractures, particularly of the hips, spine, and wrists. In fact, osteoporosis causes an estimated nine million fractures each year worldwide.

Causes of Osteoporosis :-
Many people face a higher risk of developing osteoporosis. Up to 80% of cases have hereditary cause, while lifestyle is blamed for the remaining 20%. Those with heightened susceptibility to the disease include:-
* Elderly people
* Those with a family history of osteoporosis
* Smokers
* Menopausal women
* Underweight people
* Patients taking some medications

Osteoporosis is generally caused by low bone mineral density. However, the main factor that causes the bone mineral density to be lower than normal is unknown.
If the mineral density is lower than normal but is not low enough to be categorized as osteoporosis, it can instead be considered as a case of osteopenia. This, however, can easily progress into osteoporosis, especially when left untreated.
To understand the development of osteoporosis, it is important to delve into how bones work. As living tissues, bones do not stay the same way all throughout life. Instead, the body is actually constantly breaking down old bone and rebuilding new ones. Sometimes, however, the process of rebuilding new bones slows down, which leads to the body breaking down more bones than it builds.

Symptoms of Osteoporosis :-
Osteoporosis often has no symptoms. The first sign that you may have it is when you break a bone in a relatively minor fall or accident (known as a low-impact fracture). Fractures are most likely in the hip, spine or wrist.
Some people have back problems if the bones of the spine (vertebrae) become weak and lose height. These are known as vertebral crush fractures. They usually happen around the mid or lower back and can occur without any injury. If several vertebrae are affected, your spine will start to curve and you may become shorter. Sometimes vertebral crush fractures can make breathing difficult simply because there’s less space under the ribs.
If you have a vertebral crush fracture you'll also have a greater risk of fracturing your hips or wrists.

Ayurveda for Osteoporosis :-
According to the traditional Indian system of medicine Ayurveda, osteoporosis is a vata disorder. This is an element or a dosha, which is condensed from element or space. Ancient texts claim that bones become porous due to an excess of air and ether, which results in this particular health condition.
To balance the vata dosha or to treat osteoporosis, Most commonly used Ayurvedic Herbs for osteoporosis are Harjor, Arjuna and Guggulu :-

Harjor (Cissus quadrangularis) is an Ayurvedic herb that is renowned for its bone healing properties. It is often used as a decoction as well as an external application to treat fractures. Harjor can reduce the convalescent period after a fracture. Animal studies suggest that phytoestrogens in harjor increase the thickness of cortical bone – which is the outermost hard layer of bone which is responsible for bone strength.

Arjuna (Terminalia arjuna)is a tree that is native to india. The bark of this tree is used to prepare a decoction that offers cardioprotection and enhances bone health. The bark contains tannins, calcium carbonate, and sodium chloride along with several other bioactive agents that improve bone health. The powdered bark is used to treat and prevent bone diseases as well as aid bone fracture treatments.

Guggulu or guggul (Commiphora mukul) is one of the most widely used herbs in Ayurvedic medicine, commonly recommended for the management of obesity and elevated cholesterol. However, the plant’s resin, which is the main medicinal ingredient, is also used to promote bone healing and strength.

For more details on how Ayurveda can help you in Osteoporosis, please contact Ayurvedic practitioners at Life Line Ayurvedic Herbal Clinic Adelaide.