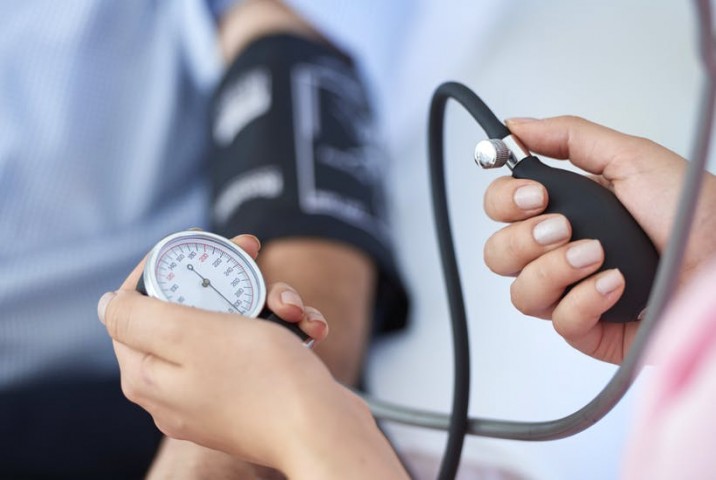 Blood pressure is the force exerted by the blood against the walls of blood vessels. The pressure depends on the work being done by the heart and the resistance of the blood vessels .
Medical guidelines define hypertension as a blood pressure higher than 130 over 80 millimeters of mercury (mm Hg), according to guideline issued by the AHA in November 2017.

Types:
High blood pressure that is not caused by another condition or disease is called primary or essential hypertension. If it occurs as a result of another condition, it is called secondary hypertension.
Primary Hypertension can result from multiple factors, including blood plasma volume and activity of the hormones that regulate of blood volume and pressure. It is also influenced by environmental factors, such as stress and lack of exercise.   Secondary Hypertension has specific causes and is a complication of another problem. It can result from:

Complications:
Some have called it the "silent killer", because in its first stage, it does not have any symptoms and most people ignore their symptoms they have. This is, until they suffer something much worse :

Ayurvedic View:
In Ayurveda, Hypertension can be compared to a condition called Rakatagata Vata. In this condition the vitiated vata gets lodged in the circulating Rakta Dhatu (Blood) and causes disturbances in its circulation. The imbalance of Pitta and Kapha also contribute in cardiac functions. The disturbed Rajas and Tamas bhava's (the main factors responsible for morbidity according to Ayurveda) definitely contribute in the pathogenesis of hypertension either in the initial or terminal stages.

Treatment :
The treatment of Hypertension or high blood pressure aims at restoring the balance of doshas particularly identifying the dominance of the vitiated Dosha and administrating cures accordingly. Majorly the line of treatment include avoidance of the triggering factors such as excessive salt, alcohol, smoking and stress, etc. strengthening the digestion process and digestive fire (agni) and eliminating the toxins (ama) accumulated in the body.
Yoga, Pranayama are suggested for mind relaxations, while shirodhara, thakradhara and panchakarma treatments such as virechana, basti etc. are generally recommended for eliminating the toxins and excess doshas from the body.

Formulations used in Ayurveda for high blood pressure are:

Consult Ayurvedic Doctors at Life Line Ayurvedic Herbal Clinic to find out the cause of Hypertension, how to change the lifestyle & food habits, which specialized herbal formulation is suitable for you to manage high blood pressure without any side effects.