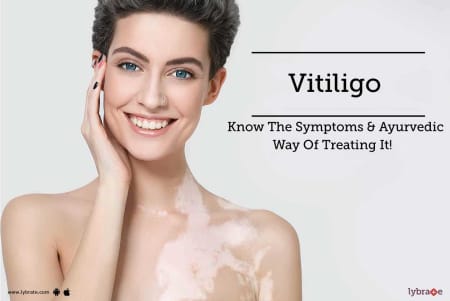 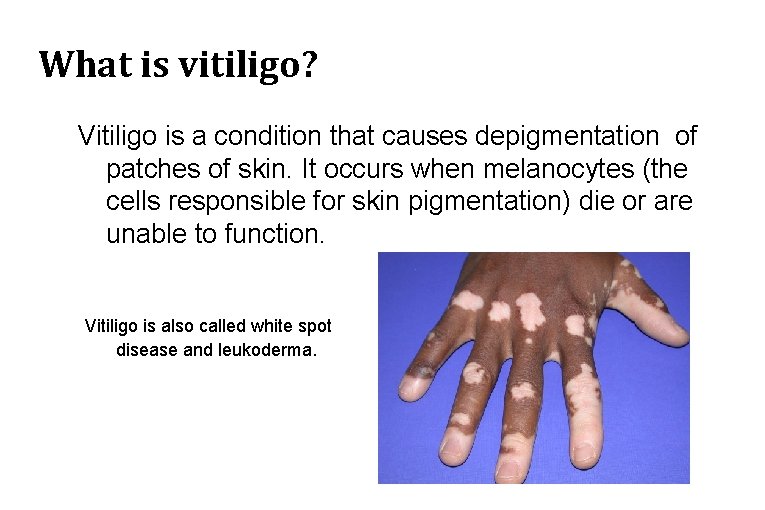 Basically Leucoderma is a Latin word which literally means ‘white skin’. It is popularly known as white patch also. It generally happens due to absence of melanin pigmentation over the skin. It may start with a small spot which later enlargeS into a large white patch. It may be pale in colour initially but gradually it turns white with time due to complete loss of melanin pigmentation over affected areas. The shape and size of a white patch cannot be judged. The area of the skin affected by this condition tends to vary from person to person. It may affect the insides of your mouth, hair, eyes and cause permanent discoloration. According to Ayurveda, Leucoderma is caused due to the aggravation of Pitta Dosha. Pitta is an Ayurvedic humor which symbolizes heat or fire, and is manifested in the skin. Aggravated Pitta leads to accumulation of ama (toxins) in deep layers of the skin, leading to the condition of Leucoderma.

Pitta is of five types; one of them is Bhrajak Pitta that gives coloration to skin. In the case of Leucoderma, Bhrajak Pitta is in an imbalanced state, and therefore, the skin starts losing its color and white patches appear. Along with Pitta Dosha, deeper body tissues like Rasa Dhatu (nutrient plasma), Rakta (blood), Mansa (muscles), Lasika (lymph) are also involved in the disease.

One of the myths linked with Vitiligo is Vitiligo cannot be treated. Well, actually, there isn’t a specific Vitiligo cure which can completely eradicate the condition; however, there are proven ways to treat it by means of restoring the skin color. Ayurveda suggests that the most effective method to heal Vitiligo is maintaining a healthy diet and changing several lifestyle habits. Besides these, the condition can also be healed the natural way using herbs and diet modifications.

Ayurvedic medicines are used effectively to manage Vitiligo successfully. Needless to mention, Ayurveda is an ancient Indian system of medicine used to treat almost all diseases, disorders and infections. When you resort to Ayurvedic treatment to cure Vitiligo, the primary target perhaps will be your digestive tract. At times, natural and herbal substances tend to be used or applied on the white patches of the skin, which is part of Ayurvedic treatment. While this method sounds pretty unusual compared to the other methods of treatment, it is highly recommended because it has been practiced successfully for hundreds of years. * Neem (Azadirachta Indica): Neem oil derives from the fruits and seeds of the neem tree. Neem oil is rich in fatty acidsTrusted Source, such as palmitic, linoleic, and oleic acids, which help support healthy skinTrusted Source. The oil is, therefore, a popular ingredient in skin care products. The leaf of the plant also provides health benefits. The leaves contain plant compounds called flavonoids and polyphenols, which have antioxidant, anti-inflammatory, and antibacterial properties that help to reduce the symptoms of vitiligo by destroying the free radicals in the body. It can also protect melanocytes against the damage caused due to the free radicals and prevent Vitiligo from worsening.

* Bakuchi (Psoralea corylifolia) : Bakuchi has strong anti- oxidant properties, increases the blood circulation locally, thus provides nutrition to the cells present there and helps in the adequate formation of Brajaka Pitta ( subtype of pitta that imparts color to skin ) in the skin. Bakuchi extracts have been reported to possess antibacterial, antifungal,antioxidant,anti-inflammatory, anti-flarial, and immune-modulatory activity. Bakuchi content increases the rate of synthesis and amount of melanin and hence encourages skin to  recover from a vitiliginous state. Itching and burning sensation were observed in few patients. Most of the external applications were advised to be applied in sunlight. The use of sunlight in early morning on affected areas of skin helps because it has content of ultraviolet rays and which leads to a favorable milieu for promoting the growth of melanocyte migration and stimulates proliferation. It is not only enough in the proliferation of melanocytes but also prevents autoimmune activity disease.

* Manjistha (Rubia Cordifolia) : Manjistha is a very useful herb for people who are in the habit of eating a toxic diet or are suffering from toxic emotions or people who are in the process of detoxifying their bodies. It is a wonderful support to the immune system since it eliminates toxins that could become overwhelming to it and increase blockages in the body. This herb possesses properties that help restore the normal skin color and prevent the epidermis’ damage.

* Khadir (Acacia catechu) :  Charaka Acharya mentioned it as the best Kustahara dravya (anti leprotic). The decoction has the important ingredients like catechin (flavonoid), catechu tannic acid and tennis. There by Khadira helps for better absorption and detoxification leading to reduction of discolouration of skin

* Jatamansi (Nordostachys jatamansi): Jatamansi having  bitter, astringent and cool potency is considered as one of the best Kushtaghna (Anti leprotic) and Stress reliever herbs. Chemically it has Acaciin, ursolic acid and nardosinone oil. Jatamansi is an excellent natural skin tonic to promote texture. It heals cuts and injuries. Also, it helps in itchy and dry skin. It fights bacterial infections and herpes and aids in taking care of rashes or burning sensation on the skin. It is a great blood purifier as it balances the Pitta dosha in the body.

* Amalaki (Indian gooseberry/ Phyllanthus emblica) : Amalaki contains the compounds which have the dyeing action. It contains tanninsgallic acid & ellagic acid. Amalaki helps to balance all three doshas. Due to its rejuvenating and anti-oxidant properties, it  slows down the degeneration of cells and regenerates new cells as well. Even it has Kushthagna property. Switra is an auto-immune disorder. The potent immune modulator Amalaki acts against the Auto-Immune Mechanism in which antibodies against melanin were proved to be isolated from the serum of Vitiligo patients.

* Haritaki (Terminalia Chebula): Haritaki is another commonly used ayurvedic medicine for Vitiligo or Leucoderma. It removes the free radicals that cause damage to the melanocytes and acts as an antioxidant. Patients suffering from Vitiligo can also face depression and anxiety that can also be prevented by Haritaki. Thus, to use haritaki is highly recommended in the severe cases of Vitiligo.

* Haldi (Turmeric) : The transient phase of inflammation in vitiligo is marked by loss of melanocytes (type of skin cell). It is characterized by accumulation of immune cells such as T cells, macrophages which promote autoimmunity- produce proteins that recognize melanocytes as intruders and attack them. Inflammatory cytokines such as Interleukin-1, tumor necrosis factor-alpha are produced which promote death of melanocytes and also inhibit their functioning. Turmeric is touted as an anti-inflammatory agent. It demonstrates this property by inhibiting production of inflammatory mediators, suppressing activity of protein nuclear factor-kappa-B which in turn regulates activity of enzymes belonging to inflammatory pathways and also prevents infiltration and adhesion of immune cells at the site of adhesion. In this manner turmeric can help control inflammation in vitiligo.Curcumin, the prime constituent of turmeric by means of antioxidant and anti-inflammatory mechanisms, helps in repairing skin. Control of oxidative stress, modulation of Biochemical pathways, regulation of enzymes, preventing inflammation are few of the techniques it uses to heal wounds and repair the skin.

* Guduchi (Tinospora cordifolia): This herb helps in preventing the destruction of melanocytes and boosts the immunity of your skin cells, minimizing symptoms of vitiligo.

These herbs work in 3 steps to treat Vitiligo:-

The first step is to stimulate the pigment cells for repigmentation. This can be achieved by giving proper stimulation to pigment cells using the combination of Cassia Fistula, Psorlia Cordifolia and Piper Longum.

Third step is to preserve the pigment which has been formed. After the pigment is formed we need to preserve it so that once pigments are produced they do not get destroyed. All this can be acheived by using different herbal combinations in the proper dose.

Back to nature is the only solution to vitiligo treatment and Ayurveda has been proving this for thousands of years. For further information and personalized treatment plans, please meet Ayurvedic doctors at Life Line Ayurvedic Herbal Clinic. CONTACT 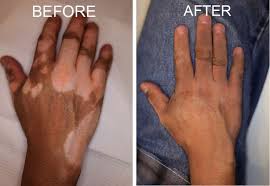