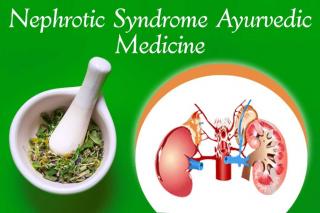 Nephrotic syndrome isn’t a disease, it’s a group of symptoms that can appear if your kidneys aren’t working right.
One of the main jobs of your kidneys is to filter your blood. This allows you to pass your body's waste products, extra fluid and salts through your urine. The glomeruli are the parts of the kidney where this happens.
With healthy kidneys, proteins in your blood don't usually leak into the urine during the filtering process. But if the glomeruli become damaged, proteins such as albumin can leak into your urine along with the waste products. If too much protein leak out, that is known as nephrotic syndrome.

Some of the conditions that can damage your glomeruli include:

* Minimal change disease, which is the main cause of nephrotic syndrome in children. Doctors don’t know why this disease stops the kidneys from working properly. Kidney tissue from people with this disease looks relatively normal under a microscope.

* Focal segmental glomerulosclerosis, or FSGS, is a disease that scars the glomeruli. It’s the most common primary cause of nephrotic syndrome in adults.

* Membranous nephropathy, in which the membranes of the glomeruli thicken. Researchers don’t know why this happens, exactly, but it’s been linked to cancer, malaria, hepatitis B, and lupus.

* Diabetes, which is the most common secondary cause of nephrotic syndrome in adults. It can cause kidney damage, known as diabetic nephropathy.

* Lupus (systemic lupus erythematosus), a chronic disease of the immune system, can seriously damage the kidneys.

* Amyloidosis, which happens when you have a buildup of substances called amyloid proteins in your blood. This can damage your kidneys.

The symptoms of this disorder vary from person to person, but the most common symptoms include ...